This is a short summary of everything important that helps to inspect a running memcached instance. You need to know that memcached requires you to connect to it via telnet. The following post describes the usage of this interface.

Use “ps -ef” to find out which IP and port was passed when memcached was started and use the same with telnet to connect to memcache. Example:

For scripted processing you may want to use ‘netcat’ or ‘nc’ command. Example:

The supported commands (the official ones and some unofficial) are documented in the doc/protocol.txt document.

Sadly the syntax description isn’t really clear and a simple help command listing the existing commands would be much better. Here is an overview of the commands you can find in the source (as of 19.08.2016):

You can query the current traffic statistics using the command

You will get a listing which serves the number of connections, bytes in/out and much more.

You can query the current memory statistics using

Which Keys Are Used?

There is no builtin function to directly determine the current set of keys. However you can use the

command to determine how many keys do exist.

This at least helps to see if any keys are used. To dump the key names from a PHP script that already does the memcache access you can use the PHP code from 100days.de.

Note that prio to memcached 1.4 you cannot store objects larger than 1MB due to the default maximum slab size.

If you try to “set” or “add” a key with a timeout bigger than the allowed maximum you might not get what you expect because memcached then treats the value as a Unix timestamp. Also if the timestamp is in the past it will do nothing at all. Your command will silently fail.

So if you want to use the maximum lifetime specify 2592000. Example:

Despite the documentation saying something about wrapping around 64bit overflowing a value using “incr” causes the value to disappear. It needs to be created using “add”/”set” again.

memcached itself does not support replication. If you really need it you need to use 3rd party solutions:

When using memcached or memcachedb everything is fine as long as it is running. But from an operating perspective memcached is a black box. There is no real logging you can only use the -v/-vv/-vvv switches when not running in daemon mode to see what your instance does. And it becomes even more complex if you run multiple or distributed memcache instances available on different hosts and ports.

So the question is: How to monitor your distributed memcache setup?

There are not many tools out there, but some useful are. We’ll have a look at the following tools. Note that some can monitor multiple memcached instances, while others can only monitor a single instance at a time.

You can use memcache-top for live-monitoring a single memcached instance. It will give you the I/O throughput, the number of evictions, the current hit ratio and if run with “–commands” it will also provide the number of GET/SET operations per interval.

Using the statsproxy tool you get a browser-based statistics tool for multiple memcached instances. The basic idea of statsproxy is to provide the unmodified memcached statistics via HTTP. It also provide a synthetic health check for service monitoring tools like Nagios. To compile statsproxy on Debian:

Now you can run the “statsproxy” binary, but it will inform you that it needs a configuration file. I suggest to redirect the output to a new file e.g. “statsproxy.conf” and remove the information text on top and bottom and then to modify the configuration section as needed.

Below you find a screenshot of what stats-proxy looks like: 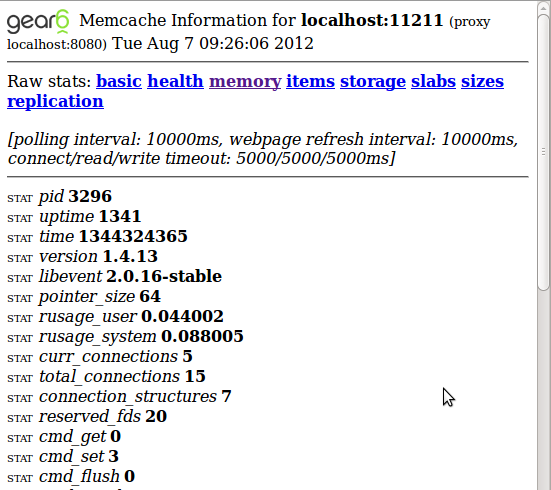 Using this PHP script you can quickly add memcached statistics to a webserver of your choice. Most useful is the global memory usage graph which helps to identify problematic instances in a distributed environment. Here is how it should look (screenshot from the project homepage): 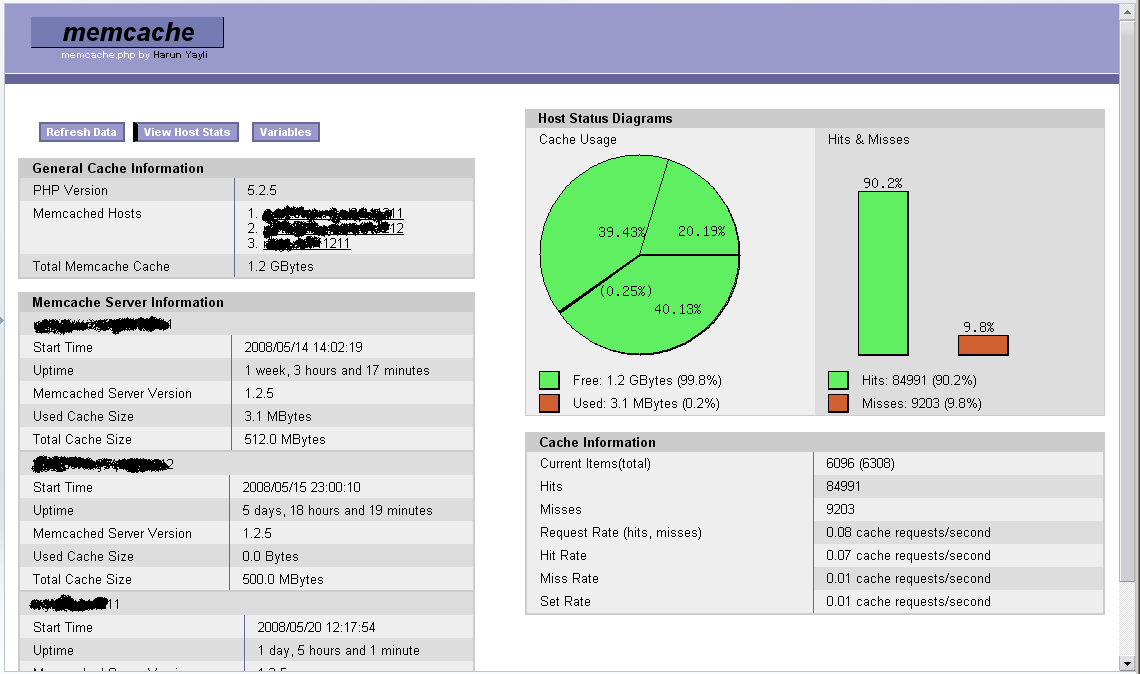 When using this script ensure access is protected and not to trigger the “flush_all” menu option by default. Also on large memcached instances refrain from dumping the keys as it might cause some load on your server.

If your memcached version is above 1.4.31, read next section for advanced method of dumping keys.

You spent already 50GB on the memcache cluster, but you still see many evictions and the cache hit ratio doesn’t look good since a few days. The developers swear that they didn’t change the caching recently, they checked the code twice and have found no problem. What now? How to get some insight into the black box of memcached? One way would be to add logging to the application to see and count what is being read and written and then to guess from this about the cache efficiency. For to debug what’s happening we need to set how the cache keys are used by the application. An Easier Way Memcache itself provides a means to peek into its content. The memcache protocol provides commands to peek into the data that is organized by slabs (categories of data of a given size range). There are some significant limitations though:

The second limitation is propably the hardest because 1MB of several gigabytes is almost nothing. Still it can be useful to watch how you use a subset of your keys. But this might depend on your use case. If you don’t care about the technical details just skip to the tools section to learn about what tools allow you to easily dump everything. Alternatively follow the following guide and try the commands using telnet against your memcached setup. How it Works First you need to know how memcache organizes its memory. If you start memcache with option “-vv” you see the slab classes it creates. For example

In the configuration printed above memcache will keep fit 6898 pieces of data between 121 and 152 byte in a single slab of 1MB size (6898*152). All slabs are sized as 1MB per default. Use the following command to print all currently existing slabs:

If you’ve added a single key to an empty memcached 1.4.13 with

The example shows that we have only one active slab type #1. Our key being just one byte large fits into this as the smallest possible chunk size. The slab statistics show that currently on one page of the slab class exists and that only one chunk is used. Most importantly it shows a counter for each write operation (set, incr, decr, cas, touch) and one for gets. Using those you can determine a hit ratio! You can also fetch another set of infos using “stats items” with interesting counters concerning evictions and out of memory counters.

What We Can Guess Already… Given the statistics infos per slabs class we can already guess a lot of thing about the application behaviour:

Of course to answer the questions you need to know about the cache objects of your application. Now: How to Dump Keys? Keys can be dumped per slabs class using the “stats cachedump” command.

To dump our single key in class #1 run

The “cachedump” returns one item per line. The first number in the braces gives the size in bytes, the second the timestamp of the creation. Given the key name you can now also dump its value using

This is it: iterate over all slabs classes you want, extract the key names and if need dump there contents.

In memcache version 1.4.31 and above there is a new command for dumping memory keys in non-blocking mode (read https://github.com/memcached/memcached/wiki/ReleaseNotes1431 ). This method is safe to run in production. The output is not consistent, but good enough for finding keys, their exact expiration time (EXP) and last accessed time (LA). Because of huge output generated, it’s recommended to use ‘nc’ command. Examples:

There are different dumping tools sometimes just scripts out there that help you with printing memcache keys:

Note: the order of setOption() and addServers() is important. When using OPT_LIBKETAMA_COMPATIBLE the hashing is compatible with all other runtimes using libmemcached.

Below is a list of tools competing with memcached in some manner and a probably subjective rating of each.

Because it simple and fast

Because it is a simple and fast as memcached and allows easy persistence and backup. But not maintained anymore since 2008!

Use when you want an embedded database. Rarely used for web platforms. Has replication.

If you are in AWS anyway and want sharding and persistency

Sharded partitioning in a commerical cloud.

Because you can run queries against the DB via memcached protocol.

There are many more key-value stores. If you wonder what else is out there look at the db-engines.com rankings.